Next Sunday’s Super Bowl represents the culmination of the 2015 football season, even though we are now into 2016.

Two of our patients had football success on the national level that we would like to recognize.

Ryan Kay played his high school ball at Dutchtown before moving on to Troy University in Alabama as a punter.

Ryan averaged 46.2 yards per punt his last six games which is outstanding.   However, having 17 of his punts during the season land inside the 20 yard line instead of going in for touchbacks was a valuable component for his team’s defensive strategy.

Christian Reeves earned a scholarship to Virginia Tech after playing at ELCA as a wide receiver.  He got to travel to the Sugar Bowl his first season. 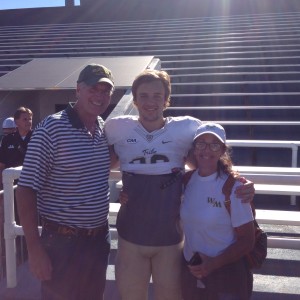 After two seasons Christian transferred to William and Mary, where he made the All Conference team in the Colonial Athletic Association in  2015.  He had four catches for the Tribe in their near upset of Virginia, and accounted for six first downs in William and Mary’s upset of #4 James Madison before going out with a hamstring injury midway through the second quarter.

What puts both of these young men ahead of many of next week’s Super Bowl players is that they both will leave college with degrees!

Christian will have a degree in Business and Economics from the second oldest university in America, where Thomas Jefferson and two or three other presidents attended.

Ryan was already a graduate student when the 2015 season began and has one more season of eligibility left.  At the rate Ryan is going, it will not be surprising if Ryan has a Ph. D. before he leaves Troy.

Both young men come from outstanding families.  Ryan is the son of Steve and Angela Kay of Jonesboro (Henry County residents).  Christian is the son of Scott and Michelle Reeves of McDonough.